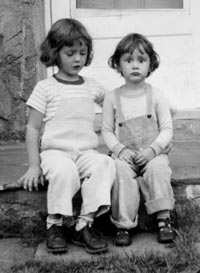 My parents had five children, three girls first and then, a few years later - long enough so that their older children could baby sit the younger - twin boys. My father was not a poker player, but he liked to say he had a full house, three queens and two jacks.

I was the second girl. In the photograph, I am the one on the right, whose overalls are slipping off her shoulder, whose socks are crumpling down, who looks disorganized and is A Worry to her older sister, who is sitting next to her trying to get her to shape up for the photograph.

I had the kind of childhood all the middle-class children of my time enjoyed. It was mostly about school, starting with nursery school, and lessons - piano lessons, ballet and tap lessons, a couple of horseback riding lessons, tennis lessons, ballroom dancing classes; there were typing lessons, eventually, which I did like, and no art lessons since everybody knew it was worth nobody's time or money to try to teach me to draw. 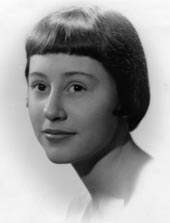 I liked school. How could I not? I was good at it, mostly; never in Algebra or the sciences, but anything that asked me to read and write. I did not enjoy college as much as the earlier school years, but that is too long of a story, and besides, I graduated on schedule, as the middle-class young women of my time did, and that was my gateway out into the world.

In this photograph, which appeared in my high school yearbook, the perceptive viewer will notice that some of the hair has been subtly colored in. Just before that photo was taken, I had asked a friend to cut my hair with a bowl, a way of giving haircuts I had read about in a book. It was a novel, of course, not a "how to cut hair" book.

Below is a picture of me, working. As you can see, for me, work is a good word. It seems to me that if I earn my own living then I can live the way I want to - it's as simple as that, in my head. I do not remember if I am correcting papers in this picture or writing a story, but I do know that I am enjoying it. 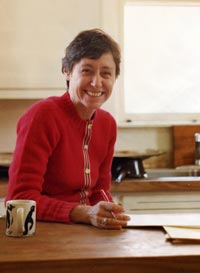 The sad truth is; if I don't enjoy doing something, I don't do it for very long or at all well. It is lucky for me that I enjoy a great many things: I know and appreciate that. Here is a list of all the jobs I've had, so far anyway. (In my experience you can never tell what might happen next.) There is only one I wouldn't want to do again, which is not bad, and one other I would only do if the circumstances were interesting enough.

The list, in chronological order: baby sitting (including a fine summer-long gig as a nanny for six kids, in Bermuda); clerical office staff, secretary, waitress, transcriber for the Associated Press; teacher and tutor then just teacher, teacher and writer then just writer. In recent years, I have had short-term jobs as a writer-dishwasher in the restaurant my son had for a couple of years, after which I worked the counter in a restaurant my daughter had for a summer, becoming a writer-counter person. Now I have returned to baby sitting. My present work is as a writer-grandmother.

My life has been rich in people and places, in family, friends, and geographies. I lived for the longest stretches of time (15-20 and counting years) in Connecticut, Maryland, and Maine, and for short stretches in Pennsylvania, Massachusetts, New Mexico, New York City, and Charleston, South Carolina. All of these, except for New Mexico, have been the settings for various books. Maybe that is why I can never write science fiction, because I set stories in places I feel familiar with. 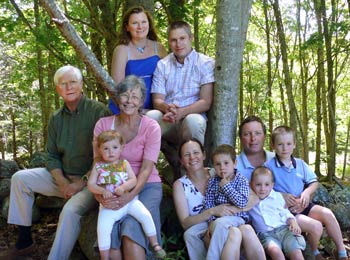 I was never a best-friend kind of person. Neither am I a circle-of-friends type, as it turns out. If I think about it (which I almost never do) I think of myself as knowing people whom I care about, sort of like a spider (a good spider, like Charlotte) attaching her web to one particular point at a time. What I am, as it turns out (and this surprises me a little) is a family person. Sometimes when we are all sitting at the table for some occasion, I have to say - looking around at my husband and two children, their spouses, their three little boys and the lone little girl - "I just really like my family." Nobody in the group is perfect. Everybody is interesting to me, and admirable, and loveable, and good company, too. I am rich, particularly, in people, in my life.

As for pets, I am a pretty low flier. We used to have dogs, one at a time, and once we even had a cat named Bongo, who holds the trophy for the World's Worst Pet. Maybe I should try to put Bongo in a book.